After lunch on Monday, our hiking group decided it was too sunny to stay indoors. We went hiking around the Baisse de la Grosse Vache, in the Estérel Mountains between Cannes and St Raphael.

As usual, the Estérel displayed its ravines and its low-lying hills like a green sea. You find no cement buildings that block the sun here. Just rocky footpaths surrounded by cork oaks, up-swept branches of heath trees, bushes of rock roses and Spanish broom that turn yellow in the Spring.

You walk to the rhythmic crunch of boots on rocks with a wide green expanse around you, prickly fresh air on your face and the maquis' still fragrant bushes of cistus and strawberry trees.

On our return leg on this 7 km hike, we walked with the Perthus mountain of the Estérel to our right, a sheer wall like a block of carved clay.

"C'est comme le Colorado," said someone up front, looking at the auburn cliff of the Perthus.

Enter the Massif de l'Estérel from the seaside town of Agay, heading inland at the roundabout and then turning right about 1.5km from Agay.

Continue to the Col de Belle Barbe. Continue beyond this Col to the next one, the Col du Mistral. Park there and begin your hike at the footpath to the right. 6.7 km round-trip.
Accessible year-round, although the Estérel can close in the summer when fire risks run high.

Want to escape the crowds of the Côte d'Azur to stroll on the region's most gorgeous footpaths?
Check out our latest hiking guide. 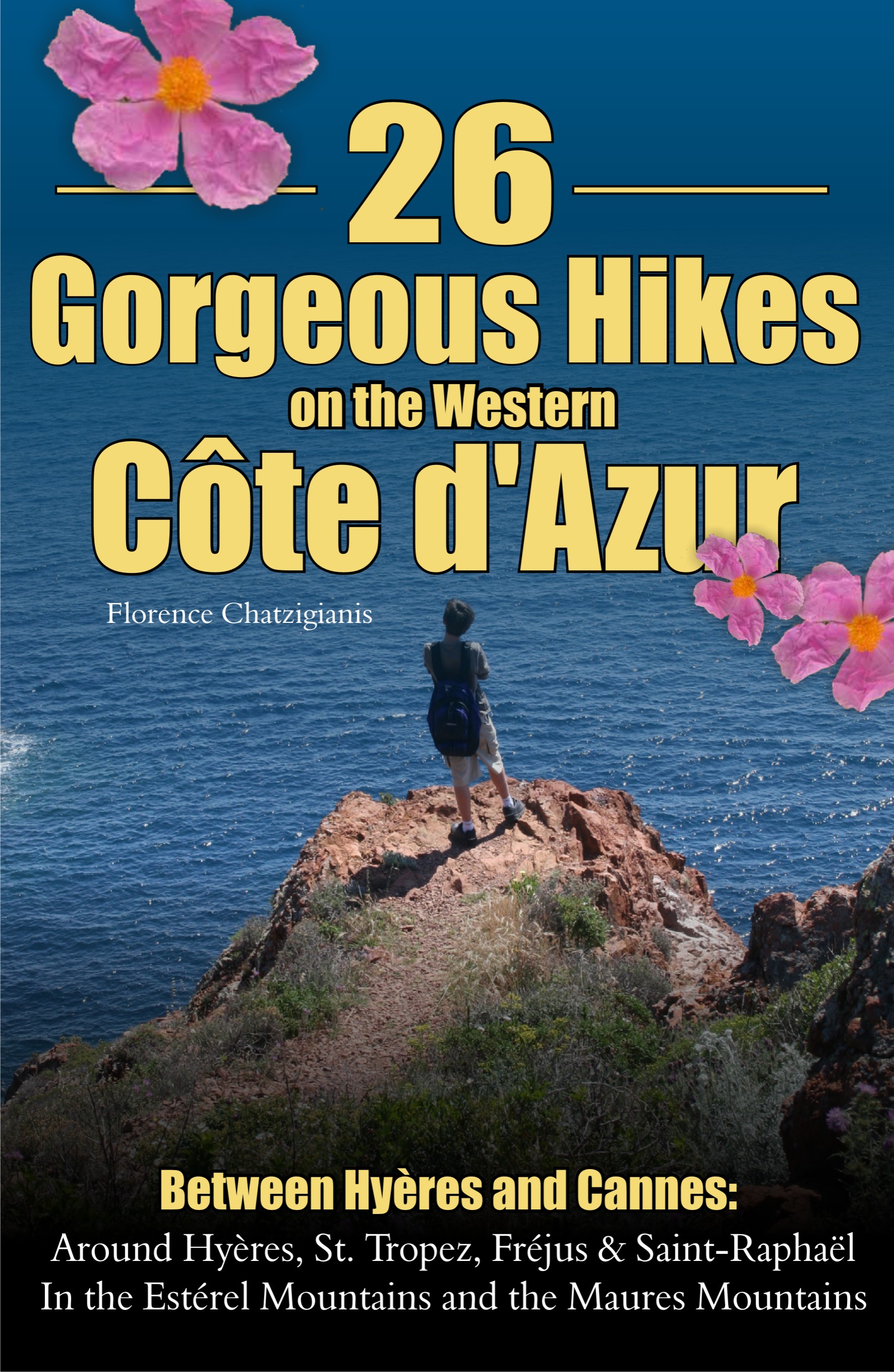 What is the French Côte d’Azur best-kept secret? Its footpaths.

Most guidebooks miss them. And unfortunately, visitors miss them too.

Yet to the walker who knows where to go, the Côte d’Azur is close to paradise.

Available at your favorite bookstore or through Amazon beginning in February 2008. Pre-order now.

Find out more about it on our About 26 Gorgeous Hikes page.

Looking for a stroll in nature on the Côte d'Azur, with waves of mountains (the Mercantour, the pre-Alps and Alps) to the North and the coastline from San Remo to St Tropez to the South and West? Here's a good choice: Le Parc de la Grande Corniche.

With its 660 hectares of protected land, the park sits on a mountain top beyond Nice, a couple of miles from La Turbie. The park's nature guide (Marie) claims that on a clear, very clear day, you can see Corsica like a bump in the seaside horizon.

What you will definitely see on a clear day are hills and mountains bouncing against the horizon, the city of Nice, its airport and barren landing strips poking into the sea, the Estérel way West. You'll hike among varied vegetation (450 species grow here). Though you're unlikely to see them, rabbits, foxes,  wild boars and owls often visit as well. You'll meet joggers, a few happy strollers walking their dogs and a handful of hikers enjoying the sites. Bring a picnic - wooden tables are plentiful.

Try the following 1 hour walk: Park at the Parking du Mont Fourche and loop around the Plateau de la Justice. 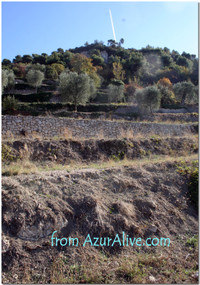 The Plage de l'Almanarre Beach, on the western neck of the Giens Peninsula by the town of Hyères, is a hot bed of windsurfing and kite-surfing. The beach is long, sandy and wild. Behind it, pink flamingoes stroll in the Etangs de Pesquiers. It's also exposed to side and onshore winds and with a sea bed that drops fast. This draws wind players to l'Almanarre.

If you do not like to play with the wind, l'Almanarre is still a fun visit where sportsy locals come to sail, jog or just hike along its flat boardwalk-like sandy path. For pure immobile beaching, the more protected beaches on the eastern side of the peninsula might be a better choice. On the next beach further south, going up on the Route du Sel road up the Giens Peninsula, you'll find the Plage de La Madrague. We bumped in to the yearly Ventilo Show. During this show, new windsurfing boards, sails and kayaks can be borrowed and sailed right off the beach. See: www.ventilo-show.com

If you're in the area, swing by the Etangs de Pesquiers and see if you can spot a string of ping flamingoes noodling necks in the brown waters of the old salt pans, looking for algae and little fish.