On December 2nd, 1959, shortly after 9PM, when lights glowed in living rooms and folks wrapped up dinner, a wall of water 40 meters high rushed down the narrow valley of Le Reyan at Malpasset and headed for the nearby city of Fréjus. It wiped out the hamlet of Malpasset, ripped roads and railroad tracks, destroyed everything in its seabound path. It killed at least 423 people.

The Malpasset dam had collapsed.

Built in the early 50's, the arched dam of Le Barrage de Malpasset was meant to supply a steady stream of water for irrigation in a region where summers are dry and rains capricious. Under the stress of a vicious downpour of rain that season, and due to fissures in the rock that supported its foundation, the dam failed.

Today, concrete slabs five meters high, three meters wide imprint the valley with a taste of disaster. Rusted iron cables poke out of the rocky debris, twisted in a convulsed mesh as if melt.

A walk around the dam remains and the beautiful hills that surround it serves as a memory of a disaster that deeply affected the region. Many families visit year-round on warm weekends. A Day In: Bormes les Mimosas Covered in yellow mimosas from late January to March, in bright pink bougainvilleas from June, the old town of Bormes les Mimosas bursts with colors like a firework.

In this old town, some 90 varieties of mimosas flourish, each doused in scents of vanilla and sweet pineapple and flush with powdery yellow balls like little rounded breath mints.

The town's roads climb around "La rue Rompi Cuou" or the break-neck road. They rest by the 18th century Saint-Trophyme church where, under a big yellow tree, a bench faces a bougainvillea. Neat and well-restored, they take cover under stone passageways or "cuberts".

If you visit, you may want to hike through the streets of Bormes les Mimosas to the Chapel Notre-Dame de Constance.  While not a "rompi cuou" walk, it climbs to reach 324 meters.  At the top of the hill by the chapel, an orientation table names the blue, green and golden sites that surround and dazzle you from the mountains of the Maures to the Golden islands of Hyères. Highly recommended. 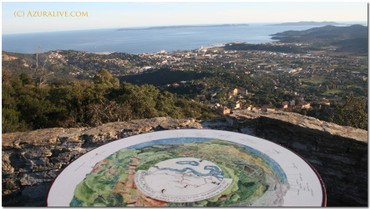 It floats over waves of dark hills in the Maures mountains, a long thin tawny brown ship with arcades for portholes, rows of roofed cubic cells for living quarters, and the pointed bell tower of its Roman church for pilothouse.

Behind chestnut and holm-oak forests, the La Verne Charterhouse glows in the browns of its Maures schist stones and the greens of its serpentine door frames and vaults.

The history of this monastery is one of turbulence and tenacity. Founded in 1170 over the site of an old presbytery, the La Verne Charterhouse endured ravaging fires, assaults and pillages. After each wave of destruction, it supporters picked up rubbles, cleared ashes and loss, and rebuilt. In 1790, after the French Revolution, the Charterhouse's goods were sequestered and the monks were in the end forced to abandon the monastery.

Classified as a Historical Monument in 1921, it was "adopted" by a group of dedicated friends ("Association des Amis de la Verne") and restored. Since 1983, sisters from the religious order of Béthléem, of l'Assomption de la Vierge and of St Bruno live in the monastery.

Parts of the monastery are open to the public for quiet visits every day 11AM to 5PM, and closed on Tuesdays and during the month of January.  In the Porterie room, you'll find fine pottery for sale, all hand-painted by nuns and monks from various monasteries across France (no sale on Sundays).

Getting there: from Grimaud, wiggle your way on winding D14 towards Collobrieres, then D214 to Chartreuse de la Verne.