For a slideshow of l'Esterel, click above (you'll need Flash Player).

The Massif de l'Esterel may be small (about 30 kms long), but it's fierce. It brandishes its red porphyry lava rocks like bloody teeth above the blue sea.

Inside the Domaine Forestier de l'Esterel, you can hike all morning and see no other life than a caramel-colored squirrel dashing up a cork-oak tree, a rabbit scurrying under heather, a harmless grass snake crossing the trail, a raven circling overhead.

L'Esterel has a tradition of reclusion, due to its rugged geology.

In the late 4th century, Saint Honorat sought quiet contemplation in l'Esterel and lived as a hermit below the majestic Cap Roux peak, in the Grotte Sainte-Baume cave.  He later founded a thriving monastic community on the islands of Lerins whose tradition still lives on today.

A less welcomed visitor was bandit Gaspard de Besse, a provençal Robin Hood who prowled the Malpey (South West of Mont Vinaigre) in search of travelers to rob.

Today, visits are safe.  The main danger is forest fires, and the park closes on hot windy days when fire risks run high.  The park otherwise closes from 9PM to 6AM.  Check with the local Tourism Offices for status before entering the Domaine Forestier de l'Esterel.  The offices also organize group walks often with the National Forestry ONF staff.

Here are some of our favorite hikes within the Esterel:

We will cover each of them in detail over the next four weeks.   A bientot!

It's Provence's pommade d'or, its golden paste, its hot-headed dip.  It's slippery smooth like its cousin the mayonnaise, tangy and full of garlic. It loves company.  Set it in a dipping bowl on a platter of poached salt cod, steamed potatoes, carrots, hard boiled eggs, green beans, beets, cauliflower, and it turns into a Grand Aïoli.

Preparing it is just as much fun as letting the word roll off the tongue.  To the purveyors of the aïoli tradition, the Compagnons de l'Aioli of Sollies-Toucas, preparing it is an art form.

"You start with a good mortar of marble or olive wood and a pestle," says Pierre, aïoli master and president of the Compagnons.

Above is a mortar set we like for its stable base, its choice of sizes (we like the larger 8", 3-cup size) and its rustic looks.

"Slice the clove in half and remove the greenish core. Otherwise the aioli will sit in your stomach all day."
"So crush the garlic slightly then add the salt. Remember, this is your only chance to salt."
"When do you add mustard?" I venture.
Pierre lets go of the pestle.
"Mustard?  Did I hear mustard?  Don't tell me you add mustard..."
"Well, err, sometimes."
Pause.
"Sure, I suppose," he says, crushing the garlic again.  "...if you like it that way, but it's not the tradition."

"You add the egg yolk now.  Just the yolk.  One yolk for two garlic cloves, and then a quarter liter of olive oil."

"The first drizzle of oil, use peanut oil, not olive oil.  Otherwise, the olive taste could overwhelm.  Then you switch to the beloved olive oil."
Pierre pours the oil with one hand and whisks the pestle around the mortar with the other.
"Add the oil slowly and turn, turn, turn."
"Do you know the joke about the chicken?"

The joke is interrupted by a fellow behind me.
"Can't I use the blender?"

Silence takes over.  The master's left hand rises and waves up and down.
"Someone please pull this man out of here!  A blender.  A blender!  Ah, non!  Ce qu'il ne faut pas entendre!"

"Yes, sure, you can use a blender if you are preparing it for 250 people.  For a handful
of friends and family, I use the good old wrist."

Through jokes and exclamations, the right wrists turns, always in the same direction.
The paste thickens against the walls of the mortar.

"You know when it's ready when your pestle stands on its own in the mortar," and Pierre victoriously plants his upright pestle in the middle of the dish.
"I've even seen people turn the mortar upside down to make sure the aïoli is thick enough."
"We won't do that today."

Share a grand aïoli platter with good company, a cool glass of Rosé wine and plenty of belly laughs.
"After all," says the master, "aïoli is really a frame of mind."

To view a slide show of aioli best made, click below:

I don't know about the other stars, but the mother Caouanne turtle (Caretta-Caretta or Loggerhead Sea Turtle) chose to lay her eggs on a family-oriented St Tropez beach on the Baie des Canoubiers.  She tucked them under enough sand to keep the paparazzi away.

The eggs were discovered in mid-July.  Biologists from the CESTMed, a center for the study and protection of marine turtles in the Mediterranean, guarded them night and day on the beach.  When the rain poured in last week, the CESTMed team placed the 80 eggs in an incubator at their Seaquarium at Grau-du-roi in Camargue. The hatchlings will be released into the wild.

The protected sea turtles rarely set a flipper on St Tropez sand.  They long for dark quiet nights to operate icognito, which is a challenge in St Trop, as any star will tell you.

A Day In: Rosés in La Motte

It's September.  At the entrance of La Motte's Domaine Les Demoiselles vineyard, vines hang low to the ground, knotted like knuckles and engorged with tight purple grapes of cinsault.

Nicolas welcomes us to the vineyard he helps run. "It will soon be time to harvest," he says.  "We start grape picking early here in Provence."  I pop in a couple grapes while he's not looking.  They explode in sweetness over the palate.

Though the vineyard could harvest using machines, the vendanges are carried out by hand here, with backs bent to the ground and shears snapping one grape bunch at a time.  "It's back-breaking work," says Nicolas, "but we want to keep our vines healthy for the long-run.  Machinery could damage them." We gaze over the rows of vines that comb the crackling red soil. Seventy two hectares of vines stretch across the estate, 68 of which are classified as AOC (Controlled Appellation) Cotes de Provence.

"So," we ask basking in innocence, "are french wines different?"

His eyes slant. "Our wines are complex," he answers.  "In some places, wines are strictly varietals (ie, from one specific variety of grape) like a Chardonnay or a Cabernet Sauvignon.  Most wines in this region are multi-graped."

In fact, in the controlled appellation of "Cote de Provence", only white wines can be made from a single grape variety. At Les Demoiselles, my favorite playful, fruity sip comes from a bottle of Le Charme Rose, a salmon-colored wine made from a magical assemblage of cinsault, mourvedre and syrah grapes.

"We bought the estate in June of 2005," says our guide, whose family also owns the "Grand Cru" producing Chateau Sainte Roseline at Arcs-sur-Argens. "We have focused on renovating the older production equipment, but we also dream of transforming the 1830 bastide into a Maison d'Hotes (bed and breakfast).  It would take a while to renovate though"

The country house's peach walls purr in the sun.  Its shutters open to the terrace and whisper: "take your time."

The entire region by the Gorges de Pennafort calls for a stroll or bike ride by its vineyards - we counted 11 vineyard estates, most on the Route de Callas, and a wine cooperative.   Hiking this small canyon formed by the Endre river just North of La Motte can make for a fun little adventure (not ideal for small kids).  Judging from the international license plates criss-crossing the countryside, the spot isn't undiscovered but it doesn't (yet) feel crowded or overdone.  Cool off from your walks around La Motte by the "Saut du Capelan" waterfall where the Nartuby river plunges 30 meters.

If you have un petit creux, the Domaine de la Maurette vineyard (telephone: 04 94 45 92 82 - 04 94 45 01 11) down the road from Les Demoiselles makes scrumptious lunches.  Menus vary with seasons and inspirations, but the beignets de fleurs de courgettes (zucchini flowers coated in flour and pan fried) and goat cheese and eggplant lasagnas we sampled were delicieux.

As seen in Le Point

The French love their vacances actives, and they love to poke a little humor at everything.

As seen in the french magazine Le Point:

"Those who have chosen the adventure option, take the stairs."

A Day In: Callian 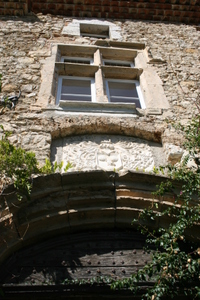 One of my favorite weekend treats is to pack up baguettes, cheeses and gourdes of water and head away from the coast into the arrière-pays of hills and rocks and turbulent history.

All over Provence, medieval villages hang on to hillcrests away from the open coastline and its waves of invaders.  Stone homes huddle together around their church, their chapel, their castle on a promontory.  They open up to squares where olive and platanus trees breathe to the sound of bubbling fountains.

At the eastern edge of the Var department, a string of perched villages look over the valley all the way to the Esterel Mountains and down to the bay of Cannes and its islands.

Callian is one of these. Centuries of history live side by side in Callian;  its castle with tall windowless 16th century towers stands close to the more modern Chateau Goerg;  the cobblestone streets twist and turn around the old castle; At the Chapelle des Penitents (12th century), a church bell dangles over the valley.

Despite its location, its history and its panoramic views, Callian is not St Paul de Vence: it isn't hugely popular as a tourist stop.  Most of the time, you can find a spot in the town's parking lots.  You don't have to stand in line for a table at the cafe.  Store owners have time to chat.

If you have a full weekend ahead of you, walking through the string of perched villages (Seillans, Fayence, Caillan and Montauroux across 20 kms) lets you soak in the magic.  Coming up in late October '06: tips and treats from planned a weekend hike in the region.  Check-in then in our Adventures category.

For a slideshow of Callian, click below (you'll need Flash Player).